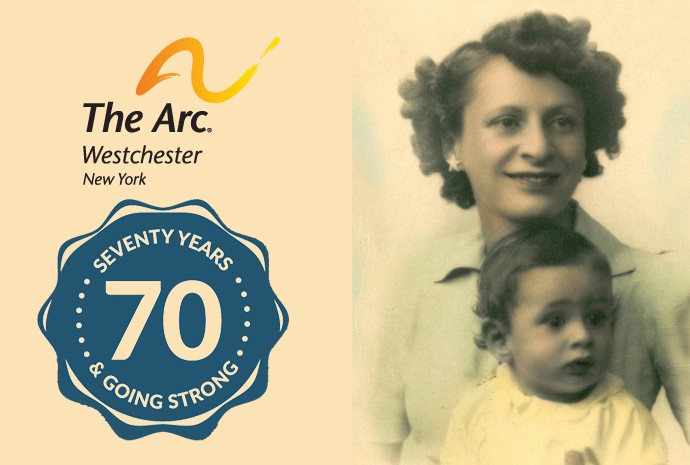 It all began in 1949 with a $3 ad that was placed in The New York Post by Ann Greenberg, desperate to find some playmates for her child with a developmental disability.

On April 17, 1949 a small group of equally frustrated mothers and fathers gathered at the Mount Vernon Public Library to discuss ways of helping their children. It was in this little gathering that the Westchester Association for the Help of Retarded Children (Westchester AHRC) was born.

A few months later the new Westchester group purchased the house at 975 Split Rock Road in Pelham; then fought and won, through court action, the right to have a school there.

In 1951 they opened the first parents’ cooperative day school for children in New York State. And from those modest beginnings, The Arc Westchester has grown to become the largest such agency in the county, serving over 2,000 children, teenagers and adults with developmental disabilities everyday.

In 1999 we celebrated our first fifty years of serving the needs of people with developmental disabilities.

What better way to tell an organization’s history than to capture the memories of people who shaped its progress.

Click here to read fifty years observations of a small handful of individuals who contributed to, participated in or simply observed the steps taken by The Arc Westchester to evolve into Westchester County’s largest organization serving the needs of people with developmental disabilities.

In 2014, we celebrated 65 years of great achievements. We have closed all of our workshops because we’ve helped people develop the skills they need to find meaningful work in the community.
We’ve come a long way, but our success is not ours alone. So much of our progress can be described through the stories of our courageous visionaries: people and families who receive our services, our resilient staff, and our selfless supporters whose collective efforts have allowed us at The Arc Westchester to Design Our Own Destiny.